Samuel Hill, a well-off planter and merchant of Cabawba, purchased two lots by the new Cahaba-Marion railroad in 1860 and began building a warehouse to store cotton. Things were looking up. Then war came, and, as is the pattern in the town’s history, things quickly turned sour. Only the walls and part of the warehouse’s roof were finished when the Confederate Congress appropriated the railroad spikes, bolts, nuts, and rails to finish a more important line connecting Selma and Demopolis. For a Confederacy that in 1861 had roughly 110,000 manufacturing workers compared to the North’s overwhelming 110,000 manufacturing plants, a partly finished cotton warehouse deep in Alabama was not going to lie unused. In June of 1863 Cahaba Federal Prison was opened. 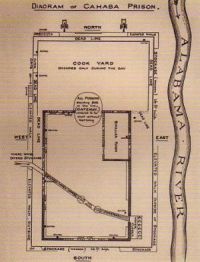 After five months, the snug 15,000 square feet crawled with 660 Federal men. R. H. Whitfield, the prison surgeon, reported generally poor conditions at the camp, citing the unsanitary water supply entering the compound dirtied by “washings of the hands, feet, faces, and heads of soldiers, citizens, and negroes, buckets, tubs, and spittoons of groceries, offices and hospital, hogs, dogs, cows, and horses, and filth of all kinds from the streets and other sources.” The building had one fireplace and no bedding or less straw for the mere 432 bunk spaces. When newly-opened Andersonville Prison in Georgia soon filled, Castle Morgan (as Cahaba Federal Prison was called locally, presumably named so after Confederate cavalry general John Hunt Morgan’s famous escape from Ohio State Penitentiary) overflowed with 3,000 inmates.

Nothing was adequate at Castle Morgan: food, clothing, shelter, firewood, sanitary conditions. Some died of pneumonia and dysentery, but the prison death rate remained less than 2%, surprisingly low for the Civil War, especially considering the fact that so many Confederate soldiers endured severe privation at the same time. And while the North’s prison death rate reached 12%, the South’s was not far behind at 15.5%, much closer than one might expect. Confederate and Federal records say that between 142 and 147 men died at Castle Morgan. Though the number may be slightly higher, for the 9,000 men interned there as inmates, this remains exceptional for prisons of that time, giving some idea of just how inadequate the many worse prisons under both Confederate and Union flag must have been.