A Foundation for Diversity

Looking at the Cahaba River Valley and beyond, one sees that the diversity of plant and animal life in Alabama is rivaled by few if any areas of comparable size in the United States. Alabama’s critical location, its physiographic and geologic diversity and the drainage pattern of the Mobile River Basin — of which the Cahaba and Alabama Rivers form the heart — make it truly remarkable. During the Pleistocene glaciation or Ice Age, the region was a refuge for species unable to survive further north. Today, many of those plants and animals exist nowhere else in the world.

The region’s diverse geology and physiology has long had a profound affect on man’s settlement in the area. Paleoindian and other prehistoric peoples found the climate well-suited to their needs, and as the temperatures warmed first during the early Holocene (ca. 8000 BC) and then again during the Middle Archaic Period (6000-4000 BC) warmer and drier seasons created a more stable environment and larger food sources. During the Mississippian Stage (1050-1540 AD), a town emerged at the site of Old Cahawha, complete with a moat, palisade and ceremonial mound. With historic time approaching the site was abandoned, but to this day, the outline of the moat is still visible in Cahawba’s landscape. 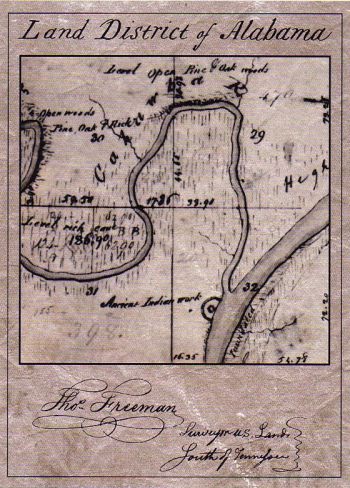 As the first Europeans and other immigrants arrived in the area that would become Alabama, they found an ideal setting in the river valleys. Along the Cahaba River, residents of Cahawba fished in a river with a greater number of fish species than any other river its size in North America while the Alabama River provided a direct link to Mobile and the rest of the world. Set in the heart of the Black Belt, a rich agricultural region known for its dark, fertile soil, Cahawba was located in what would become the center of Alabama cotton production. The environment was ideally suited to man.

Just as earlier migrations of people followed natural settlement patterns, the pioneers at Cahawba built homes and farms along the Alabama and Cahaba Rivers, plowed the rich prairies and established trades and businesses as more people arrived. Today, these patterns may seem far removed from our ordinary experiences, and Cahawba’s diverse environment often means less to us than what road we take to work or what neighborhood is safe and has good schools. But consider that before Cahawba, the first capital of Alabama, there was the large Native American settlement here that predates written history. Both are gone now, but before any of this, there were the two rivers that provided the rich environmental foundation that made both towns possible.