If you discount Gettysburg and some of the bloodiest battles of the Civil War, the Sultana disaster ranks as perhaps the greatest tragedy after the years of woe the fighting wrought. Toiling homeward up the Mississippi River after the war’s end, 2,300 freed Union prisoners from Cahaba and Andersonville were on board, as well as a thousand bushels of fuel, making the steamboat Sultana dangerously overloaded. Indeed, rated for only 376 passengers and crew, the 260-foot steamer nearly capsized in Arkansas when hundreds of men rushed to one side posing for a photographer setting up for a shot of the heavy-laden vessel. 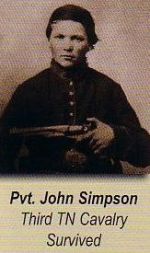 After picking up the soldiers in Vicksburg, a chaotic, undisciplined event, the Sultana planned to release them in Cairo, Illinois. But eight miles past Memphis, at 2:00 a.m. the first boiler exploded. Two others quickly followed. It is thought that the fire-tube boilers, caked with sediment from the muddy, flooding Mississippi, backed up until enough pressure built up in the overheated flue to blow the sediment out with a massive burst of steam, causing the explosion. Many died in the blast and ensuing fire. Others drowned. Only 520 survived to be hospitalized and more than 200 of this number died soon after. It was a time of great tragedy in America. John Wilkes Booth shot Abraham Lincoln on April 15, 1865, and less than two weeks later, on April 27, the Sultana took more than 1,600 down with her.