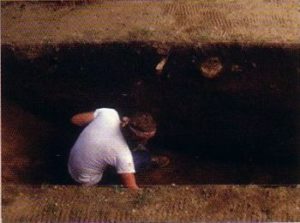 While today’s visitors can discover an assortment of authentic clues to Cahawba’s past by exploring its abandoned roads, moss covered ruins and historic cemeteries, many more forgotten stories lie buried beneath their feet. Each and every life that was lived at Cahawba has left an archaeological footprint behind. If we want to recover these lost stories, special care and scientific methods must be applied.

Surprisingly, the most interesting history lies not in the buried objects themselves but in a detailed analysis of the placement of these artifacts in their buried context. In fact, disturbing the earth at an archaeological site is much like disturbing evidence at a crime scene: important, vital information is lost forever. Professional archaeologists — like crime scene investigators-are specially trained to recover as much evidence as possible. Future technological advances will only help us reveal more of Cahawba’s mysteries. So, it is important that significant portions of Cahawba’s buried history be preserved intact for future generations.

The Alabama Historical Commission, as the caretaker of Old Cahawba, has to balance the need to interpret the site to current visitors by revealing these buried stories through archaeological excavations with the competing need to preserve and protect those buried resource for future generations.

It is Alabama history in its most natural state.